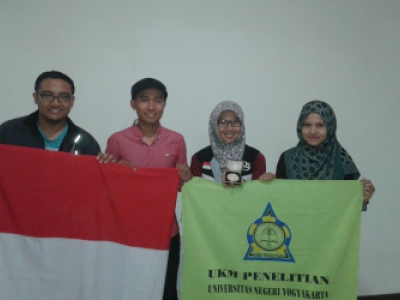 Hundreds of inventors from several countries were reported to be involved in the big agenda, including Malaysia, Indonesia, South Korea, Vietnam, Sri Lanka, USA, Bosnia, Thailand, Taiwan, and China. The participants were divided into several sub themes in accordance with one main theme. “Environment and Health”, namely Classed A: Energy Conservation and Carbon Reduction, Classed B: Environmental Protection, Classed C:Health Care and Biotechnology, and Classed D: Intelligence Home and Living Technology.

Under supervision of Bambang Sulistyo, S.Pd., M.Eng., the YSU team belonged to Class A (Energy Conservation and Carbon Reduction), with the invention of MUFF HELP, which has been selected by the committee, together with the other 2 teams of Brawijaya University, Malang. This class brought heavy challenges because the rival proposed sophisticated inventions which had been through advanced research; even, some of them have been certified with a patent.
In the implementation, Rifaldy and his team were exposed with several constraints, namely regarding time management, trial, and preparation. However, he as the Runner up of The 2015 Most Outstanding Student of Faculty of Mathematics and Science, suggested that the obstacles became the challenges to withstand and here, solidarity is the key. He and his team extend a big hope that YSU students and other Indonesian student could contribute in developing Indonesia. (PR of Research SCU, YSU)