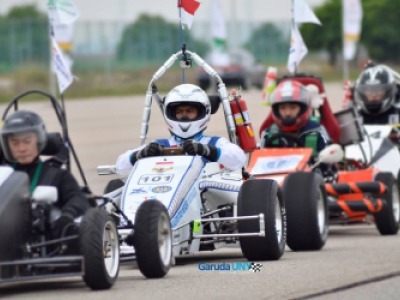 The team succeeded in gaining the first position for maneuverability and second position of acceleration category on the first day of the competition. The team ganined 594 out of 600 points.

On the second day, the car race competition continued for the endurance category. Despite the wet weather which made it difficult for the car to race, HYVO 101 ran through the wet race track and finished in the second position.“We kept on thinking positively when the rain made the race track more dangerous to pass,” Yusuf Mulyadi, the team leader, said.

After the scores of all categories were accumulated, Garuda UNY Racing Team was announced as the first winner for the hybrid car category. “I couldn’t believe it when I finished the race. Thank you for all the supports given to us,” added Komara, one of the team the racers.