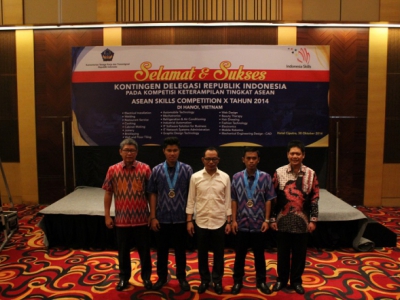 Tangguh Wicaksono, a student of Mechatronics Education Department, and his team mate, Hermawan Andrianto, won a silver medal in the Asean Skill Competition X in Vietnam for Industrial Control category. After joining the preparation and training stage for as long as 10 months at CIVET, West Java, they succeeded to win the second place in the category.

Before competing in the ASEAN level, Tangguh and Hermawan had to compete in the provincial level. Winning the national competition, they moved forward to the next level. They represented Indonesia in the ASEAN level for the Industrial Control category.

In the competition, they were required to do three projects namely: Mechanical Assembly, Electrical, dan Programming. The projects were aimed at building a manufacture machinery to collect, process and assemly raw materials and finally sort out the final products. The judges assessed the competitors’ works based on the checklist of required items to be done. The judges were also from different countries and they should assess competitors with different nationalities from theirs.

The competition was pretty tough. The teams got slight point differences. “It was such a relief when we completed all the tasks and projects well. We only one point behind Vietnam’s team. They got 98 and we got 97,” said Tangguh, who is now a first year student in YSU.
Tangguh further said that winning the silver medal in this competition has given them more spirit to develop their skills. (Yuliana)