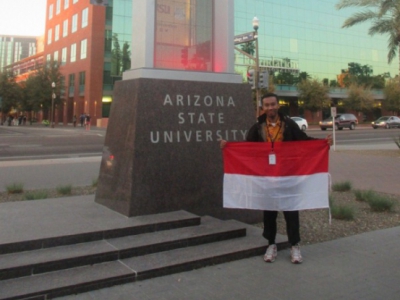 To taste the academic spirit in the United Stated is no longer merely a wish for Janu Muhammad, S.Pd, a Geography Education graduate, since he just recently grabbed the chance to attend short course in Arizona State University in Young Southeast Asian Leaders Initiative (YSEALI) Academic Fellowship on Civic Engagement. YSEALI took place from 20 February to 26 March 2016. This is a youth exchange program in ASEAN aiming at giving leadership training in the scope of environment, civic engagement, and entrepreneurship.

Janu is scheduled to attend the lecture for five weeks with materials related to civic engagement, including international development and sustainability, community service, education, youth and leadership. In addition to obtaining leadership and community service materials, Janu and the other 44 delegates will be given a chance to visit several places of interest in the United States, namely Grand Canyon, suku Navajo, Los Angeles, and Washington DC. “I’m preety much thankful for this precious opportunity. It likes a dream comes true, since I used to watch US flag on TV, now I can see it directly”, he said. This chance is the 4th times for Janu to be involved in international events as the representation of Indonesia. Previously, he has attended Summer School Program in the Netherland in 2013, homestay in Australia in 2014, and AUYS in Malaysia in 2015.

His involvement in such international programs is inseperable of his background. When he was still an undergraduate student, he chaired Student Activity Unit of Research in faculty level. Several times he tried to join the selection stage and was passing through this year. “I am whole-heartedly grateful for this chance. My prayer and efforts I made are paid off”, he stated.

In the end of the program, Janu will submit and present social project proposal in Washington DC to be implemented in ASEAN. As the son of grocers named Ngadiyo and Ibu Lasiyem, he hopes what he did could inspire the other students. (Sari)