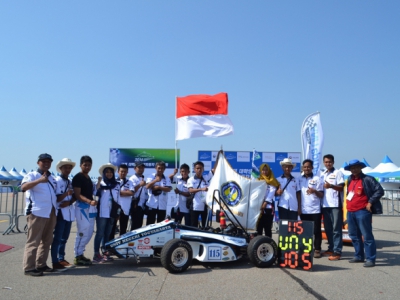 Sutiman, as the advisor who accompanied the GUT delegation on the ISCC 2016 added that on the endurance category which took place on the second day, GH 16 completed its fight in the 15 laps trial with the total distance of 22, 5 km with the time of 21, 49 minutes. This achievement was the fastest on the history of International Student Car Competition Korea Selatan, this achievement managed to land Garuda UNY Team (GUT) the 1st rank acceleration electric, the 1st rank maneuver overall, and The 1st rank endurance.

Judging from the GH 16 performance on the ISCC 2016, GUT earned respect from its competitor, the guests from the automotive industry, and also the visitors of the race. This was clearly seen from the numbers of visitation in the GUT paddock. The paddock was the most lively one, cleanest and also one of the most professionals in the eyes of the committee. Besides the achievement during the three sessions, GUT has gotten the best time and new record since the 2013 ISCC.

“During the endurance trial, we’ve got the fourth row, in the number 12 position, but we managed to slip into the first position. Even the GUT’s car overlapped the competitor car in the second position with the 1, 5 lap difference on the finish line.” Expressed by Roni, the Garuda UNY Team’s driver after the race.

Garuda UNY Team, the phenomenal car which was the only representative from Indonesia has fared well in the 2016 International Student Car Competition and managed to elevate the name of Indonesia in the international level with a maximum effort. On the Sunday morning, the already arrived in Indonesia and got back to work again for the preparation of the prestigious race, 2016 Student Formula Japan. (een)