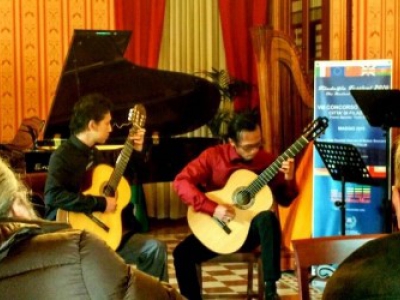 At its participation in the Filadelfia music competition, in Italy this year, Indonesia was represented by six students of Yogyakarta State University (YSU) who collectively participated in the category of classical guitar. Roby Handoyo, Adi Suprayogi, Vaizal Andrians, and Gita Puspita Asri, belonging to the group of guitar quartet "Nocturnal", while the next group, "Duo Poeticos", consisting of Birul Walidaini and Bagus Mardian, both alumnus of the Faculty of Language and Art YSU, who at the moment are currently completing their studies at the Università della Calabria (UNICAL) Italy.

In the competition participated by 27 countries, Indonesia has managed to control the contest in the class of Chamber Music category D with two proud achievements. The winner of this category team was won by the guitar quartet "Nocturnal" from Yogyakarta State University (YSU), while the second runner-up in the same category, was also successfully achieved by the "Due Poeticos duet." The additional achievement of the Indonesian team was also improved by Roby Handoyo who competed in the class of Classical Guitar Solo category, winning the first runner-up in that category.

Septian Hadi, the coordinator of external relations and international Indonesian Student Association in Calabria (PPI Calabria), was deeply satisfied with the achievement of the Indonesian team as a whole. "With the condition that all members of the team only consisted of students, facilities and instruments of participants from other countries that were much more qualified, the achievement of the delegation this year, we can say that it has exceeded our expectation. Appreciation for the participation and achievements of the Indonesian team come from visitors and other participants. As the one and only team from South East Asia, Indonesia has shown the skill and potential in the international classical music scene.”