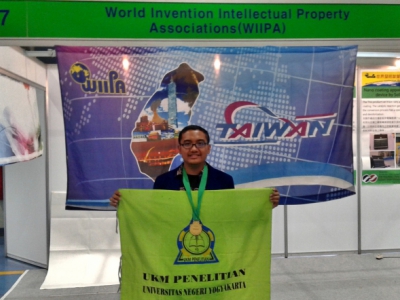 Under the supervision of Dr. Das Salirawati, a team from YSU led by Rifaldy belonged to class A, that is, Agriculture & Enviromental and Renewable Energy with specification in environment; their invention is entitled “Aloe Vera Gel Extract (X-AVG) as a Natural Preservative of Soybean”. Previously, this project has obtained a bronze medal in The 2nd International Young Inventor Awards (IYIA) in Jakarta that was held last June. In this agenda, the team was exposed with heavy challenges because the rivals came with advanced research-based inventions which are quite shopisticated. Even, some of the inventions have been patented.

This competition brought the concept of exhibition and presentation where each participant was given a booth to present and display their invention in front of the jury. The presentation as well as question-answer session were carried out in English. The candidates were required to bring some instruments, namely the invention product and the supporting posters, brochures, articles, etc. The jury walked around each booth and addressed some questions regarding the product being displayed. Most questions were about the products’ strength and excellence, implementation, and the patent if any.

During the competition, Rifaldy and the team persistently faced several constraints, especially related with time management and coordination among members, the product trial, and preparation. Nevertheless, Rifaldy as the Runner-up of the Most Outstanding Student from Faculty of Mathematics and Science 2015 revealed that the obstacles they encountered during the event must be overcome together since solidarity among team members becomes the key determining factor. He himself expected that all representatives of YSU and the other students representing Indonesia always show their best for contribution to their country. In addition to Yogyakarta State University, there is Brawijaya University as Indonesian delegate; both were selected through INNOPA program. (Dewi dan Rifaldy)