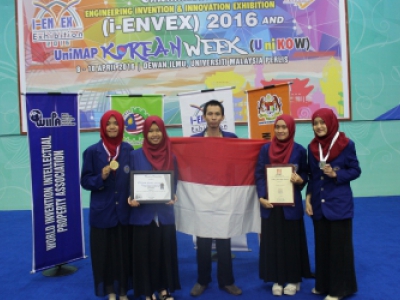 The competition was held for 3 days.On the first day the participants were asked to set-up standbooth which will be assessed by the jury. The participants of ENVEX 2016 are more than 200 team from 20 countries around the world, for example South Korea, Taiwan, USA, UAE, China, India, Iraq, Japan, Romania, Poland and Malaysia. All of the participants are competing to set up, exhibit and explain the innovation products they brought.

On the second day, the Exhibition took place, where every team stood at their standbooth and the examination by the jury then took place. The YSU team belong to the E category which was I.C.T, Multimedia & Telecommunications, and Electricity & Electronic. The jury who assessed them were exceptional. The first jury who scrutinized the equipment was from Japan and the second jury who checked the tool’s precision was from Romania.

On the third day, the Exhibition and Award Ceremony which was the conferment of special award and innovation award to the winners took place. YSU team received Gold Medal in this I-ENVEX competiton. “We did not expect to get Gold Medal in this event, it is because the participant of I-ENVEX were not from students only, and the majority are exceptional”, said Yanna, one of the team members. For the special award, Indonesian team received Leading Innovation Award from IIPNF (International Intellectual Property Network Forum), Japan. “Hardship never betrays the result” is our team jargon (Astuti & Nilam)