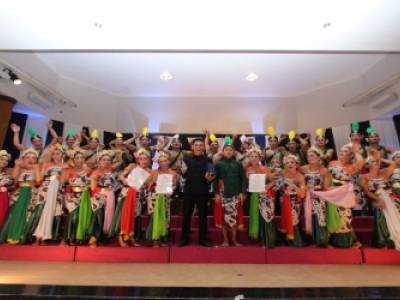 A month before, “SW” was involved in 7th A Voyage of Songs, International Choral Festival, a grandeur, Asia – Pacific scaled agenda organized by Konzert and Fortune Travels from Singapore. Taking place in Penang, Malaysia on 26—29 November 2015, YSU mandated 41 delegates comprising singers, conductors, and crew. It is reported that 5 countries in Asia – Pacific joined the event, that is, Philippines, Malaysia, Singapore, Korea, and Indonesia.

After the competition, “SW” proceeded their agenda by having Culture Concert Tour “Anggayuh Aruming Nuswantara” which philosophical foundation is to reach dream while promoting Indonesia in the international eyes. The event was to facilitate cultural exchange of both parties, as seen from the design of the event by combining dances performed by students of Universiti Sains Malaysia (USM) and “SW” choir, YSU.

“SW” sung several etnic songs from Indonesia; let’s say Menthok-menthok, Manuk Dadali, O Ina Ni Keke. Their performance is as one of the efforts of “SW” Choir to widen their cooperation network to assert YSU mission, namely to be a World Class University. As an exchange, Encik Nato from Culture division of USM revealed USM choir would visit Indonesia that is hosted by YSU in the upcoming year. (Odhi)