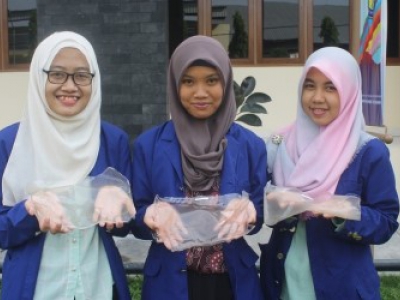 The students Faculty of Mathematics and Science (FMS) YSU succeeded in harnessing the starch of dioscorea tuber to create an environment-friendly bioplastic. Through their research entitled The Synthesis and Characterization of Environment-Friendly Bio-plastic based on Yogyakarta’s local dioscorea, Dita Ardwiyanti along with her team from Natural Science Education Department belonging to the Student’s Research Creativity Program (PKMP) managed to make bio-plastic materials that have not been widely used. Other team members are Hesti Kurniawati, Idea Engga Yonanda, Nurlina Rafidah, Donna Meylinda.

Dita explained that, conventional plastic waste, that still dominates today, comes from petroleum or natural gas which is difficult to decompose. One of the alternative solutions being aggressively offered by the world's population is substituting conventional plastic raw materials that are difficult to degrade with raw materials which are more easily degraded naturally. Cassava, sweet potato, potato and sago are the raw materials that dominate the market share of bio plastics. Materials that have not been much in use Dioscorea hispida and Dioscorea esculenta.

Dioscorea hispida and Dioscorea esculenta, said Dita, contain high levels carbohydrates. This indicates that the starch content in it is also quite high because starch is a complex carbohydrate which is insoluble in water. Carbohydrate content in the yam and Dioscorea esculenta are respectively 23.5% and 31.3% (MOH, 1981). With the high carbohydrate content, the tubers are included in one of the Yogyakarta’s aspect of local knowledge that can be introduced to the public in the form of bio-plastics. Research procedure includes the manufacture of starch extracts, Making Bio-plastics with Blending Method, Swelling Test, and Bio-degradation Test.

"The characteristics of bio-plastics made from yam and Dioscorea esculenta starch tubers that have been identified in this study include mechanical properties such as, the highest tensile strength by bio-plastics starch with formulations of 3 ml glycerol, whereas the elongation at break at the highest point is with the formulation of 7 ml glycerol ", as explained by Dita.