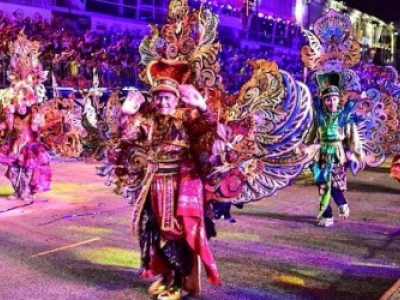 Wonderful Indonesia totally displayed its charms at Chingay Night Fiesta 2016 in Singapore. In the pre-parade at F1 Pit Stop, the Carnival team of the Faculty of Engineering, Yogyakarta State University (UNY), who won the Grand Champion World Costume Festival 2013, has participated and brought the culture of Yogyakarta.

"Wonderful Indonesia must appear dazzling. The world should know that Indonesia is the champion of festival costume, not that famous Brazilian Carnival Rio de Janeiro," says Tourism Minister Arief Yahya, Thursday (02/18/2016).
With the concept of gunungan (mountain-shaped wayang), The Gerebeg ceremony of Yogyakarta Sultanate, the world champion of Costume Festival successfully hoisted Wonderful Indonesia. The festival costume that was held in Singapore was a kind of cultural trademark of the palace of Yogyakarta and Solo that during the Maulud (Birth) of the Prophet (Muhammad PBUH) has always been performed with the palace soldiers marching.

"Because we have cultural roots, then we can perform all out. There is a concept of gunungan, which at the peak of the procession, a large-conical-fruit-container becomes the object of snatch. Those who can snatch, supposedly, will have an abundance of sustenance," says Afif Ghurub Bestari, the supervisor of the carnival team of FE YSU.

The performance of the carnival team of Faculty of Engineering YSU made the contingents of China, Japan, Russia and Malaysia, Korea, USA and Singapore dazzled. Many of the participants of Chingay Night Fiesta 2016 asked for a photo with the Wonderful Indonesia team from Yogyakarta.

Not also counting the visitors who stopped by and asked for a selfie, the team of journalists who stood nearby suddenly became photographer over the requests of the visitors. Everyone asked for selfie with the carnival team.
The other Indonesian contingent, who features a Kupu Kuwi parade, which was a range of butterfly motion, also received applause from eight thousand attendees who packed the Marina Bay area of Singapore. This proved, that Indonesia is the champion in the carnival and costume party.

"Our mission is from Yogyakarta for Indonesia, from Yogya to the world, and from Yogya for Wonderful Indonesia, "says Afif, the choreographer and carnival designer team of the Faculty of Engineering.
Afif hopes that his team's performance this time will be able to serve as a warm-up before performing at the triennial event of World Costume Festival 2016 in the Philippines. He believes wonderful Indonesia can go international. (Metrotvnews.com/humasFT)